Must See in New York

Author: Miki Mo
Tweet
More by this author
0
Attractions and Sightseeings
Must See in New York

New York is one of the most famous and iconic citites in the world. Some of the most iconic buildings are in this wonderful city but some people tend to shy away from their more famous landmarks. I recommend braving the crowds though as they are the most popular for a reason and below I will tell you more about why you shoudl visit some of New York´s landmarks.

The most photographed tourist landmark in the world, the Empire State Building stands alone as the tallest building in New York City. The venue of many famous scenes from media such as King Kong´s ascent to the top in the “King Kong” film. To visit New York without a visit to the Empire State Building is a incomplete visit. Take in the wonderful views from the 102nd floor, the tallest observation deck in the city and enjoy lookign down over not just Manhattan but for a great distance over a large portion of the city. There is a fee to go to the topof the building and its two observation decks with the lower observation deck located on the 82nd floor. With this price, you can also see the accompaning exhibits on offer at the Empire State Building such as the New York SkyRide exhibit 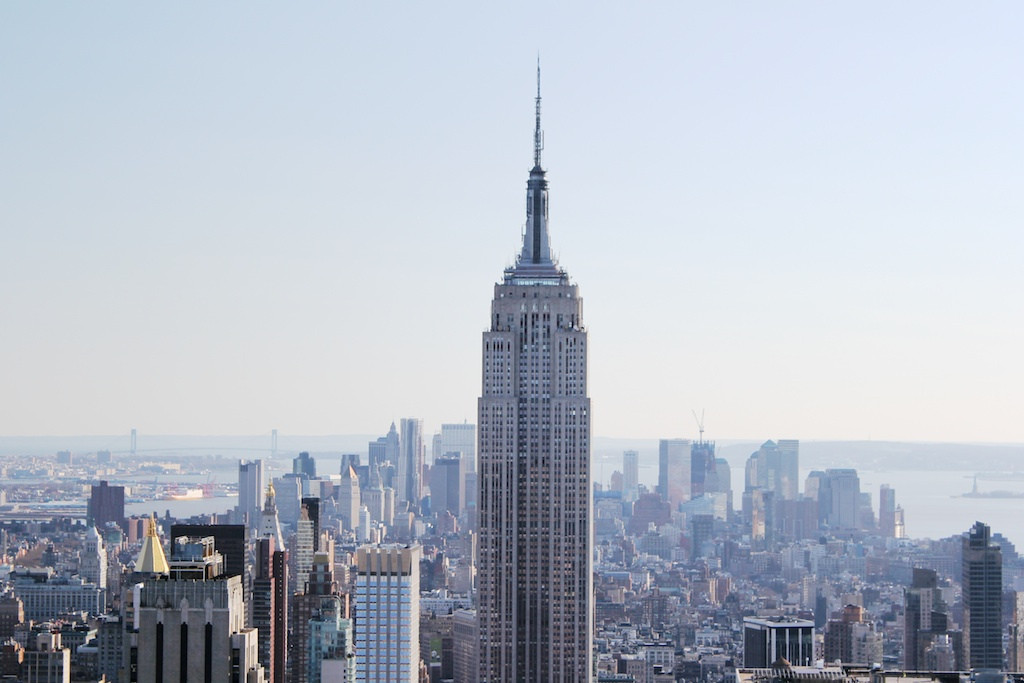 Another of the iconic features of New York is of course the Statue of Liberty on Liberty Island. Given to the Americans by the French in 1886 as a monument to the American Indeopendance in 1776. It is another structure of New York and is worth the trip accross the harbour to see it. A ferry runs from close to Battery Park in Manhattan to Liberty Island. There is a small charge for the ferry but as the monument itself is free to enter then you can consider this a small concession. The Liberty island itslef is a interesting visit as you can enjoy spectacualar views of Manhattan as you look back accross the harbour and the whole island is a great space to spend a few hours and get lost in the beauty of New York. 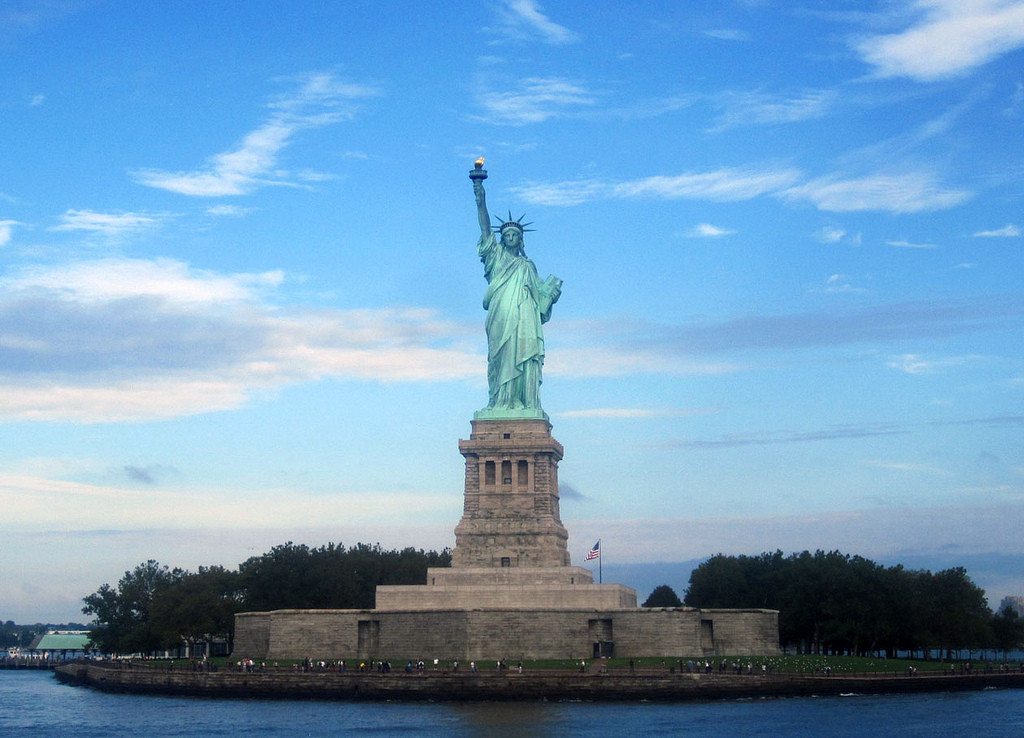 Must see in New York Nr.2 Statue of Liberty

There are not many of the biggest cities boast a train stationa s a iconic landmark but this is Grand Central Terminal in New York City. Built in 1871 and it is the largest train station in the worldby the number of passengers. It has 44 platforms and 67 tracks. The most famous thing about Grand Central Terminal though is the main concourse, at 275ft lon, 120ft wide and 125 ft tall, you understand the magnitude of Gran Central. The ticket booth in the central of the station is one of the most iconic images of Grand Central as is the four faced clock that stands above it. An iconic image of New York that will not fail to amaze visitors. 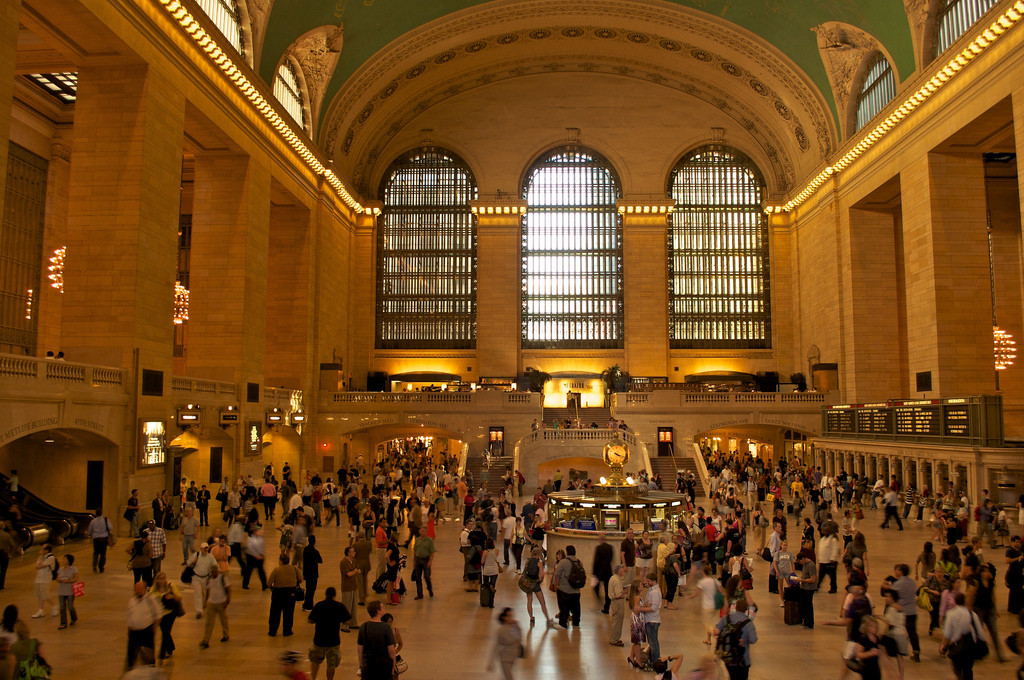 Rockefeller Center is a complex of 19 buildings in New York containing the iconic GE building (30 Rockefeller Place), Radio City Music Hall among others. A visit to Rockefeller Center is customary to a visitor to New York due to the size ofthe developement. The GE building is home to NBC and is the venue for the building of many of its biggest shows such as Late Night With David Letterman and Late Night With Conan O´Brien. The GE building is probably most famous for its extremley popular observation deck “Top of the Rock”. Here you will find some of the best views possible of New York and it has a advantage over the observation deck at the Empire State Building as from the Top of the Rock, you can have a unrivalled view of the Empire State Building in all its glory. In the plaza at the entrance to the building is a perfect visit around Christmas time as this is where the famous Rockefeller Place ice rink and huge christmas tree are constructed. Radio City Music Hall is one of New York´s most popular tourist attractions in the same complex and has been visited by more than 300 million people. 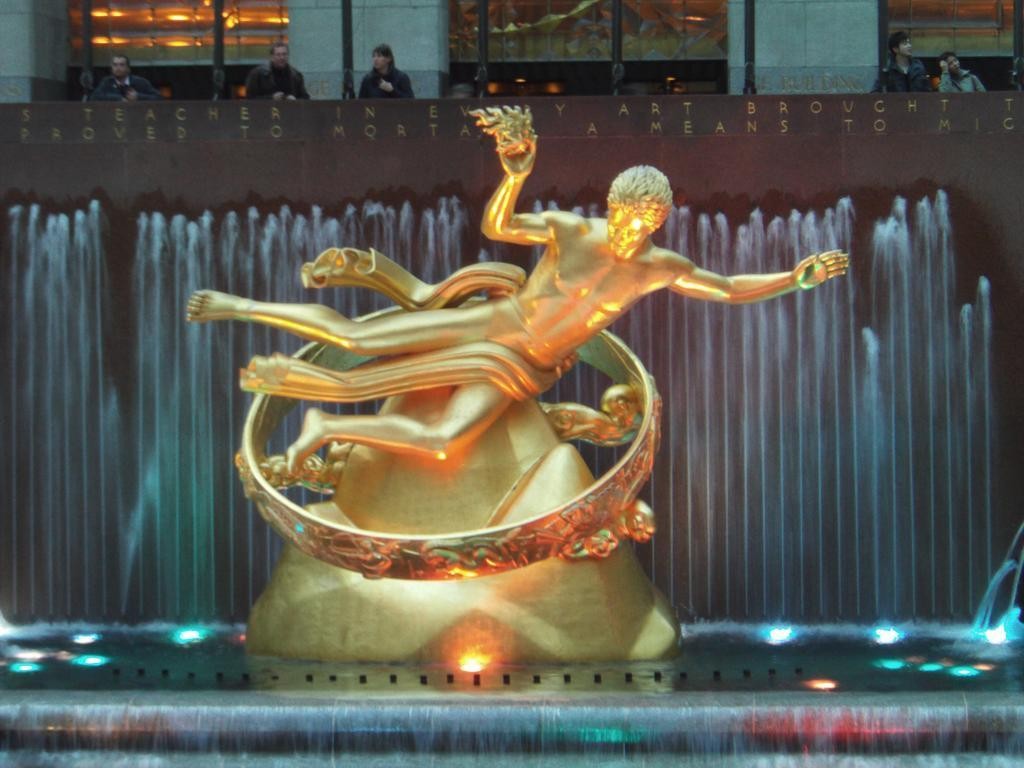 Perhaps the most famous park in the world is Central Park. It was constructed in 1857 and is the most visited urban park in the U.S.A. It recieves 35 million visitors annually. The park itself is 2.5 miles (4 km) long between 59th Street (Central Park South) and 110th Street (Central Park North), and is 0.5 miles (0.8 km) wide between Fifth Avenue and Central Park West. Its total area is 843 acres. The park itself is beautiful and a great place to visit and in particular if you want to relax in the heart of New York then this is the perfect place as you can still see the skyscrapers of Manhattan but in a relaxing green enviroment 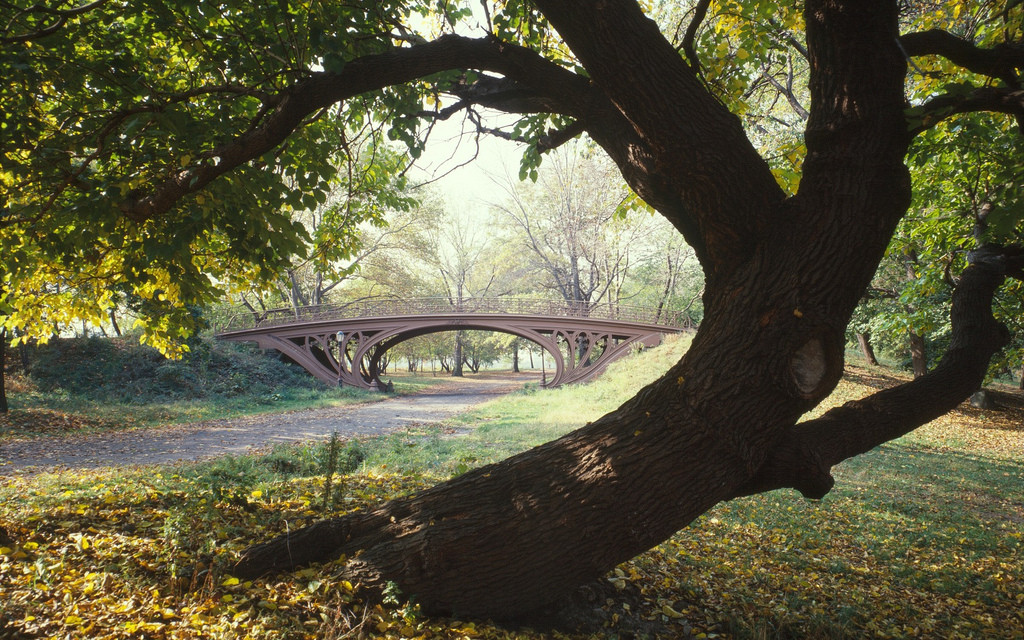 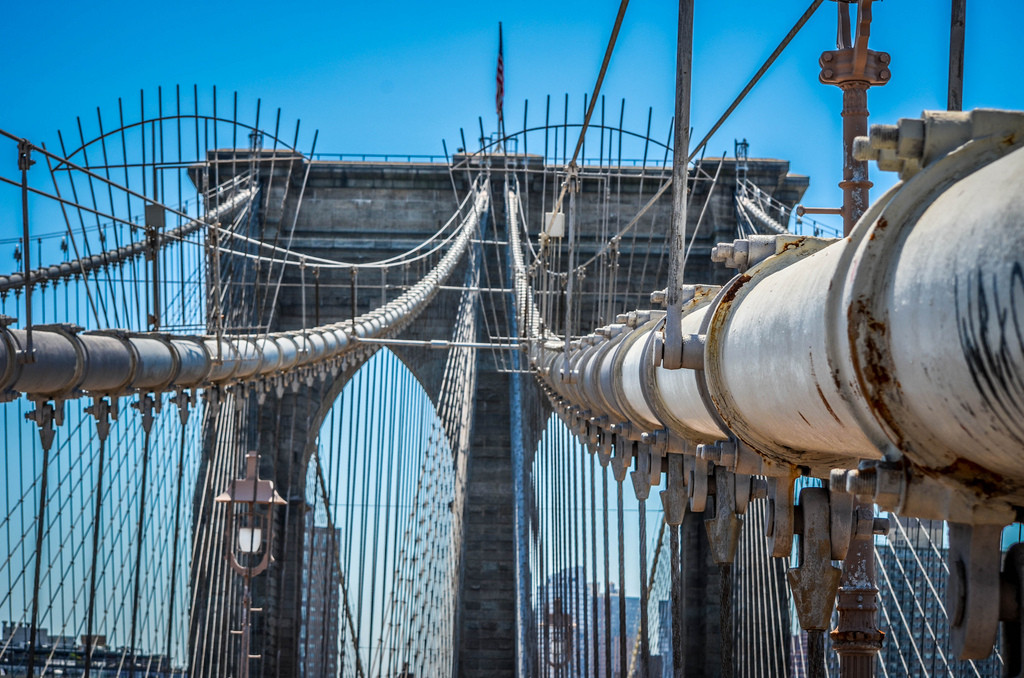 One of New Yorks busiest junctions is of course Times Square. at the junction of Broadway and Seventh Avenue and stretching from West 42nd to West 47th Streets. Times Square is one of the definign images of New York and of America. It is home to many of the biggest theatres of Broadway as well as housing a extraordinary collection of illuminated advertising signs that shine down upon the square. The most iconic event in Times Square is the New Years Eve celebration. Every year on December 31, large crowds gather in Times Square to celebrate the New Year with the famous Times Square ball dropping as the clock strike 12. The place to be to see the new year in in New York and a great place to visit all year round. 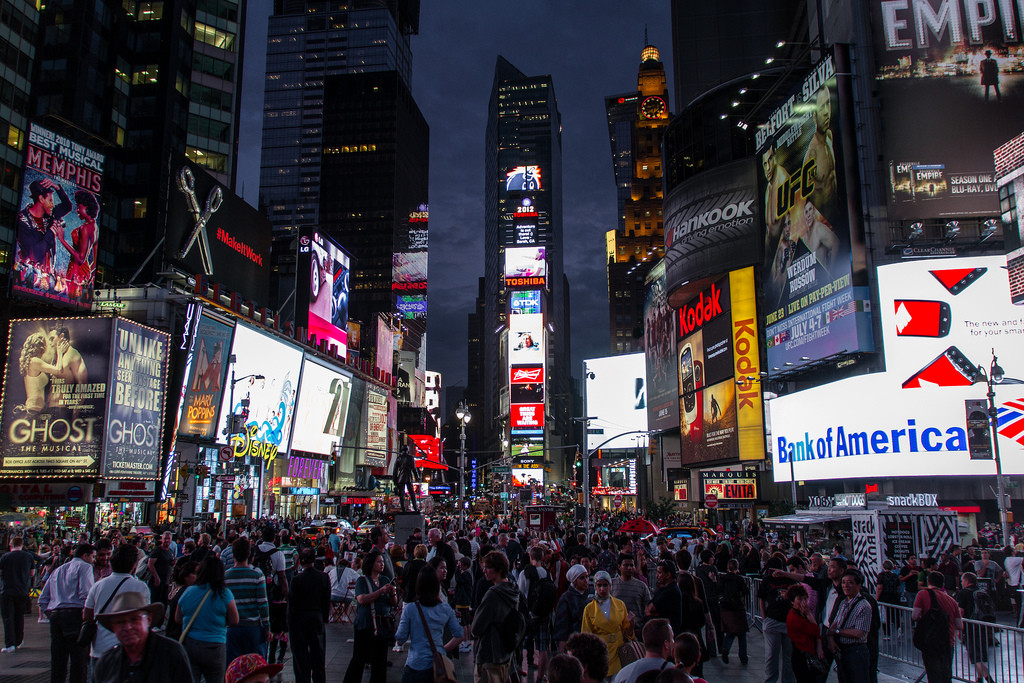 New York has a incredible number of world famous sites that most people can instanly recognise and associate with New York. Iahev mentioned the main ones in my opinion but of course there are so many more and everyone will have a different favourite so please comment and mention your must see in New York.